5 Common Mistakes To Avoid At Your First PDGA Tournament 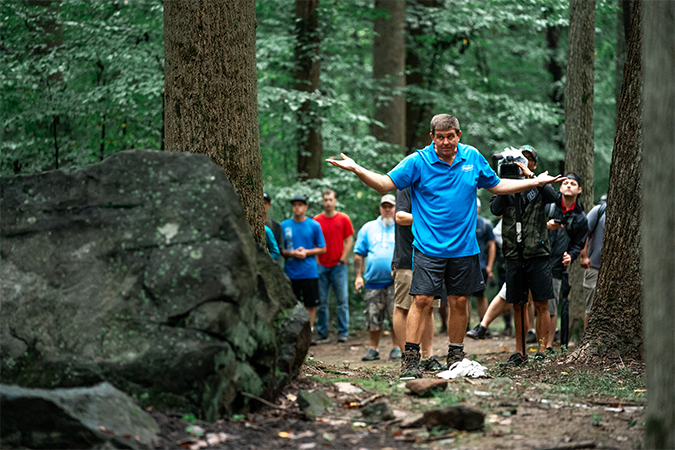 Everyone makes mistakes, especially as they are learning a new craft. But for those who want shorten the learning curve when making the transition to sanctioned tournament play, it will be useful to understand some of the most common mistakes made by beginners entering their first PDGA event.

1. Playing in the wrong division.

This be the most daunting choice facing a player heading into their first sanctioned event. If you pick a division that is above your skill level, you’ll find yourself outclassed by the competition. On the other hand, if you enter a division beneath your skill level you may be accused of the ultimate disc golf sin: sandbagging. But fear not – there many resources to help you pick the appropriate division for your maiden PDGA event, not the least of which are the more experienced players hanging around your local course. Ask one of them to watch you throw some shots and tell them how you typically score at local courses; they should be able to give you a good idea of which division is right for you. For more information, check out the PDGA division descriptions.

2. Not knowing the rules.

To play in your first PDGA tournament, you do not need to be a Certified Rules Official, nor do you need to memorize the PDGA Rulebook, but you should be familiar with the basics like how to play a shot that’s gone out-of-bounds (806.02), how to take a legal stance (802.07), or how to deal with a lost disc (805.03). Here, once again, the local disc golf community is your best resource. Joining a PDGA League is a great way to learn the official rules of the game in a fun, relaxed environment where the stakes are a bit lower than at a higher-tier event. You can also learn quite a bit by watching coverage of pro events and by paying close attention to the commentary.

3. Not practicing the course.

Many beginning players are surprised when they make the drive out to a new course for their first tournament and aren’t able to play at the same level they are used to at their favorite local course. Familiarizing yourself with the layout of the course is a crucial part of tournament preparation and will help you get the most out of your scoring potential. Most touring pros try to arrive at an event at least three days and sometimes upwards of several weeks early in order to scope things out. They want to know the ideal landing spots for each fairway so they can have the best angles to attack the pin, and this can usually only be done by going through the course multiple times. Unfortunately, amateur players often don’t have this luxury because they work a regular job through the week and can only get there the morning of the event. But even when this is the case, a lot of benefit can be gained by getting to the course very early on the morning of and trying to play though as much of the course as you can. Lastly, if you are unfamiliar with the course, try to pay extra close attention during the players meeting before the first round. The Tournament Director will likely go over important aspects of the course layout that need to be known.

4. Not bringing backups for your favorite discs.

Along with hurting your score, playing on a course that you are unfamiliar with can also result in the increase of lost discs. There are bound to be thick bushes, tall grasses, muddy creeks, and other hidden hazards waiting to swallow up your favorite plastic, never to return again. Moreover, PDGA rules states that the group can only search for a disc for three minutes before declaring it a lost disc and moving on, so unlike a casual round where you are free to search for your lost discs as long as you please, during a sanctioned event you may be required to leave a fallen soldier behind. If you are staring down a shot during the tournament where you feel unsure about what is just around the corner, or if you think there is a high likelihood of hidden hazards in your way, you’ll want to have the option to pull out a back-up and leave your favorite disc in the bag. It may not fly quite as well for you as your “money” driver, but the freedom and confidence you gain by not having to worry as much about losing it should more than make up for the difference.

Maybe you’ve been working incredibly hard to get your game to a certain level and you’ve been killing it in leagues and in casual competition – you may expect this success to translate seamlessly to your tournament play. Oftentimes, however, the pressure of a sanctioned tournament can take players out of their comfort zone. Tournaments can cost more to enter, require more time and effort for travel and – perhaps most significantly – produce results that will be housed in the PDGA tournament database and become a part of disc golf history. These things can take some getting used to, and you shouldn’t expect to be able to play your game as freely as you might in more familiar circumstances. Knowing this, you can set your expectations appropriately which can lead, not only to less disappointment should you not immediately achieve the results you had envisioned, but also help to reduce the pressure you put on yourself during the tournament, which can lead to better results, faster. Have fun, play your game, and don’t get to shaken up should things not go exactly how you planned.

So there it is! Go forth and enjoy the thrill that is PDGA sanctioned tournament play – you’ll test your skills like never before and meet great people who share your passion for the sport.  And by keeping in mind these five common mistakes made by beginners entering their first PDGA tournament, you may just avoid some of that early trouble.

5 Common Mistakes To Avoid At Your First PDGA Tournament was last modified: July 23rd, 2020 by PDGA
Share this post with your friends.