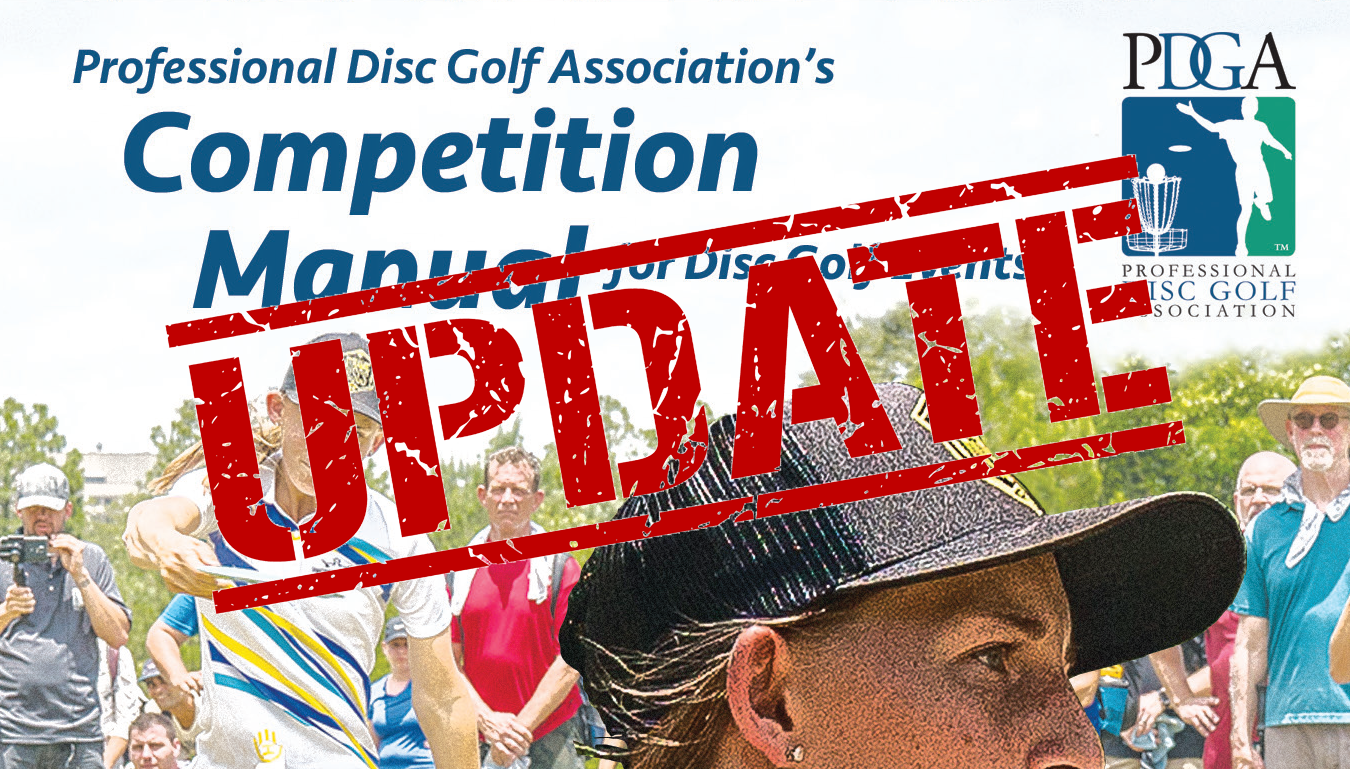 Revisions are periodically required to update PDGA rules and competition standards to keep up with the constantly evolving nature of disc golf equipment, courses, tournament management, technology, etc. These updates and edits can range from nearly unnoticeable verbiage alterations to complete rewrites of an entire section. Fortunately, the changes approved by the board of directors for the 2021 revision of the PDGA Official Rules of Disc Golf and the PDGA Competition Manual for Disc Golf Events contain mostly the former.

These revisions come about via a process that appears fairly simple on paper but requires dozens of hours of work behind the scenes by the many volunteers involved. The process is as follows:

The items listed below were approved by the board of directors and will take effect on January 1, 2021. They will NOT appear in the online versions of the PDGA Official Rules of Disc Golf or the PDGA Competition Manual for Disc Golf Events until the day they take effect.

Please note: Any text that is highlighted in green denotes an addition to the rules or competition manual, while strikethroughs indicate that language will be removed.

A disc is in a hazard if its position is clearly and completely surrounded by the hazard or by a combination of the hazard and an out-of-bounds area.

A. Parents/guardians must be responsible for their children during PDGA-sanctioned events. Neither the PDGA staff nor the event staff are responsible for the children of tournament players, spectators, etc. during events. Parents/guardians may not leave unaccompanied children at or near the scoring area, clubhouse, or any other tournament venue.  Any child younger than 13 years of age who is accompanying any player group and is not a caddie must be supervised by an adult who is not part of that player group and not a caddie.

F. The PDGA highly recommends that Tournament Directors create their tournament schedules to ensure that all players in the two youngest age groups Junior 08 and Junior 06 be scheduled to play no more than 18 holes in one day.  Additionally, TDs should use their discretion to possibly limit the amount of daily play concerning the Junior ≤10 divisions (age 10 and younger) depending on the length and strenuousness of their course.

G. The public display or use of tobacco products by event staff, players, and by extension their caddies, is prohibited at all times at PDGA events of any Tier that solely offer Junior divisions (i.e., divisions beginning with MJ and/or FJ prefixes), including the PDGA Junior World Championships.

Q:
My drive ended up under a picnic table. Can I play from behind it? On top of it?

A:
In general, no. Picnic tables, along with any other park or course equipment, are obstacles on the course. They are to be treated as any other obstacles, for example a bush or a tree. How you play your next throw depends on the picnic table. If there is room for you to take a stance under it, even by sticking your leg underneath, that’s what you do. If your disc is on top of the picnic table and there is room underneath, it is a lie above ground and you mark directly below it and play from there. If the disc is on top and there’s no room underneath (for example, a solid picnic table), you play from on top if that is reasonable. Otherwise, the table is treated as a solid obstacle and you mark behind it on the line of play.

Q:
My group made a ruling that turned out to be wrong. They called me safe when I was actually OB, so I played from an incorrect lie. Do I get penalized?

A:
Maybe. It’s up to the TD. You may be penalized for the OB because that is the correct ruling for that throw. However, you should not be penalized for having played from an incorrect lie (misplay), as you played according to your group’s ruling. If there is doubt about whether a ruling is correct, you should consider playing a provisional. You are responsible for playing the course properly. If you disagree with the group and an official is not readily available, play a provisional and have the TD make a ruling later.

Q:
Everyone in my group watched my soft putter push through the side of the basket and come to rest completely inside of it, not wedged at all. They said the putt was no good. Are they right?

A: Yes. A throw that is observed by the group or an Official to enters the target by wedging through the tray or by dropping through the top of the chain support is not considered good, even if it comes to rest in the basket or chains, because it has not entered the target correctly (above the rim of the tray and below the top chain support). If no one sees the throw on a blind hole or when the target is too far away, the group must make a decision.

Q:
As I release a putt, I push off from my back foot so that after release I am balanced on my front foot. I typically freeze there for a couple of seconds, then swing my back foot forward and continue toward the hole. Is that a foot fault?

A:
It’s hard to say. Your group will have to make a judgment call. To demonstrate “full control of balance” the player must perform some action that breaks up the flow of movement toward the target after release, before proceeding toward the target. Some examples of actions that demonstrate balance might be: (1) a clear pause and display of balance, (2) placement of the back foot on the ground behind the mark, or (3) retrieval of the marker disc. The key to all of those is to show balance and control of your body behind the mark before moving forward. The best course of action is to leave no room for doubt, which is easy to do if you are indeed in control of your body after you’ve released the putt.

Q:
On a blind hole, I threw a fast, stable disc that skipped hard toward the basket. When we walked up, we found it wedged in the front of the tray. Was that an ace?

A:
Probably not. It’s a group decision. There’s a very high probability that the disc wedged itself into the tray from the outside. A disc must enter the target correctly in order to complete the hole. The odds that it entered above the tray and then wedged in the tray on its way out are extremely low. However, if your group cannot reach a majority decision, the benefit of the doubt goes to the thrower and the ace counts.

Q:
A rival of mine likes to play head games, for example by telling me my score for the round, that he thinks I will make or miss a putt, etc. Can I call a courtesy violation on him?

A:
Maybe. Though being a jerk isn’t explicitly listed as a courtesy violation, any action that is “distracting or unsportsmanlike” can be penalized. You and your group will need to decide if the player’s behavior is bad enough to call. Short of that, it is something you, your group, and/or other players will have to work out with them. If the behavior is bad enough, or there’s a pattern of it for that player, you can notify the TD and/or the PDGA Disciplinary Committee.

Q:
My disc was stuck in a tree far above two meters (with the two-meter rule in effect), when another player’s throw knocked it to the ground. Where is my lie, and am I subject to a two-meter penalty throw?

A:
The interference rules state that a disc that has been moved is played relative to where it first came to rest. Since that was clearly above two meters, you are subject to a penalty throw just as if the disc had stayed in the tree. As for the player whose throw knocked your disc down, the interference rule does not apply when the interference is caused by a competitively thrown disc.

The following Q&As will be removed from use:

Updates Coming To PDGA Official Rules of Disc Golf & Competition Manual In 2021 was last modified: July 22nd, 2020 by PDGA
Share this post with your friends.

Sarah Hokom lines up a forehand drive at the 2020 DGPT - Idlewild Open. Photo: Alyssa Van Lanen / DGPT  Sarah Hokom seems to have found the magic formula at the Idlewild Open: keep the disc in-bounds and make the putts you’re supposed to make....

Idlewild Open: Hokom Shoots Herself Into The Lead With 18 To Play

Opening Rounds Recap August 9, 2020 by Bennett Wineka in Recap with comments Photo: Alyssa Van Lanen – DGPT The Idlewild Open is about limiting damage, and the leaders after two rounds have done their best to keep the over par strokes from adding up. Sarah Hokom...

Opening Rounds Recap August 9, 2020 by Bennett Wineka in Recap with comments Photo: Alyssa Van Lanen – DGPT The major swings that come at the Idlewild Open showed up on day two, and while some of the leaders held onto their lead card spots, the rest of the top...

Finley Sprints To A 5-Throw Lead, McMahon Picks Up Where He Left Off

Holly Finley kept it on the fairway and dominated with the putter Friday at the DGPT - Idlewild Open. Photo: Alyssa Van Lanen Holly Finley posted just her fifth career 1000-plus-rated round Friday to take a commanding 5-throw lead over the FPO field as the DGPT...

Sarah Hokom lines up a forehand drive at the 2020 DGPT - Idlewild Open. Photo: Alyssa Van Lanen / DGPT  Sarah Hokom seems to have found the magic formula at the Idlewild Open: keep the disc in-bounds and make the putts you’re supposed to make....